There’s not a whole lot to say on the social side of things, other than that I participated in a bake-off last night (great dessert – cinnamon apple crumble – but it didn’t win). Oh, and that I went exploring the campus and watched the sunset with some of the other REU students – hearing and deaf. That was fun! In my opinion, night-time is always the best time to explore.

In the past week, Dr. Rahman and I were able to successfully secure the necessary MicroSD card (and adapter) for our application to print out our data from the application. Once that happened, I only needed to adjust my framework slightly in order to make use of it the way we wanted to. After that, I went exploring! After two days of taking samples, I realized that the timestamps for the accelerometer and gyroscope sensors were off. Luckily, it only took me an afternoon with the code (and the good, old Internet!) to figure out that those timestamps were based on the device’s uptime (nanoseconds since the last system reboot) and not the Unix epoch (nanoseconds since January 1st, 1970 – the standard way to measure time on a Linux operating system). After finding a solution online, inserting it into my code, and making adjustments to fine-tune the operation to our app, it records the right timestamps and, for the CSV files, I made them human-readable! I believe that’s called a double-whammy…

Unfortunately, that means the first three samples I took are probably useless. However, I feel physically great, if only a little sore at the end of the day. I also managed to not burn in the sun and instead got a nice, new set of face freckles and a tan. At the very least, the data I got while I was out yesterday was something Dr. Rahman could start working with, in addition to my routes today. The cool thing is that now we can start analyzing data that the application collects. Dr. Rahman’s already started by plotting out my travel points that were recorded by the app. You can see the beginnings of it below: 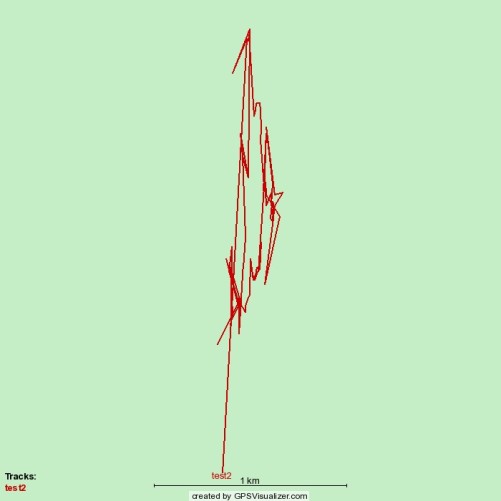 On the left, this is a map of my directional route from yesterday. It’s a little squished together when compared to the image on the right, which is a visual representation of all of the location points in my two-hour journey, but it’s a more or less accurate description of the points on the map. I’ll admit that the point on the lower left of the detailed map photo may or may not be part of the data set. It’s not one I recall and it’s a visual outlier when you take into account the sampling rate (see last week’s post for that). The graph on the left has a really long, near-vertical line, which also is a little strange, considering the locality of all of my points. Other than that, however, these two photos are accurate descriptions of the data I collected yesterday. That’s all, folks!

I am an undergraduate student who is currently studying computer science at Longwood University. This blog follows my experiences during my first REU program. View all posts by Susan Chatfield