Thus far, it’s been a “hit-the-ground-running” kind of week to kick off my summer research experience, but the deeper I delve into the material, the more excited I become about continuing to do so- and the more I learn about… how to learn. This research is, perhaps more than anything else, an opportunity to become adept at the skill of absorbing, contemplating, applying and (hopefully) improving a preexisting collection of information in relatively short order. It’s a cyclical process by nature- learn, apply that knowledge to overcome an obstacle, run into another obstacle, and repeat- but not cyclical in the sense that no progress is made. It’s this repeated process that makes it easier, gradually, to fall into a rhythm and gain momentum. The more I learn, the more efficiently I feel I am able to learn more, and the more I feel the learning curve start to give way to a less steep mountain to climb. Jumping in this week and devoting the time to breaking down that learning curve with continual effort, as was suggested to me by multiple individuals experienced in research, has paid off ten-fold. The fulfillment I derived from actually tinkering with code and producing visible evidence in this first week exceeded even my particularly hopeful expectations of what I stand to get out of this experience.

Currently, Dr. Sprague and I are working on developing a project around the idea of improving existing implementations for preventing what is known as “blackout catastrophe” in neural networks. To understand the implications of this, a brief overview of some basic concepts will likely prove helpful. A neural network is a particular implementation of machine learning which can be visualized as a series of nodes arranged in layers. Deep neural networks are neural networks with multiple hidden (inner) layers in them. 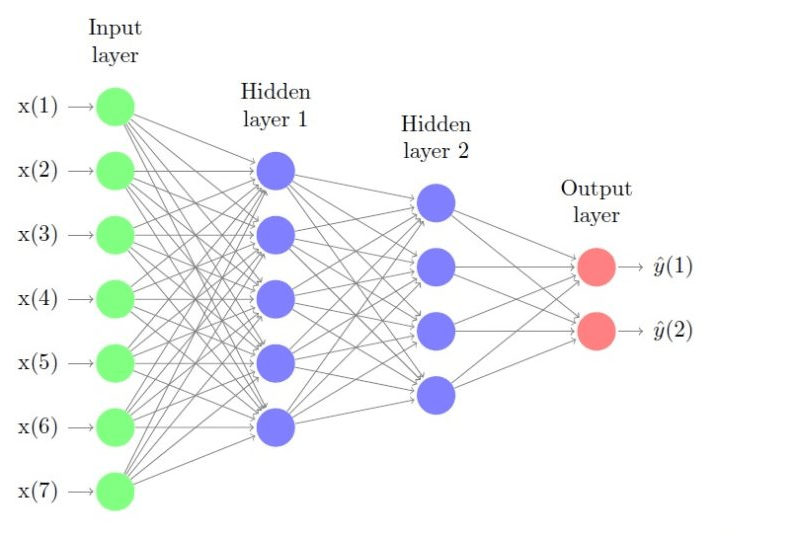 The nodes are connected by edges (symbolized above by arrows). The network model maps the input data to the output via a function, and the goal of learning is to optimize the weights along these edges to minimize the error (and therefore improve the accuracy of the output layer in terms of its distance from a target value). This can be achieved via Stochastic Gradient Descent (SGD), which is a method for tuning each of these weights in such a way as to minimize the error incurred, and SGD uses the data on which the model is trained to optimize these weights over many iterations. However, issues arise in the context of continued learning (that is, training a model on several tasks sequentially), when SGD alone is used in training the model. Essentially, the network model, when trained on a new task, alters the weights in the most optimal configuration for the new task alone, and often achieves good accuracy on that new task. However, because many weights have been changed (and potentially substantially changed), the network “forgets” how to perform previous tasks if they are different in nature. This logically follows from the observation that different tasks will likely correlate with different optimal weight values and the function from inputs to outputs will change from task to task. However, a recently developed learning algorithm from DeepMind incorporates something known as Elastic Weight Consolidation (EWC) to help prevent this. EWC works by determining which weights are most important to a particular task and “protecting” those weights when future tasks are learned by preventing those weights from being changed too much. That way, multiple tasks can be learned and some weights can be more freely adjusted, but those most critical to retaining previously learned tasks remain somewhat preserved. 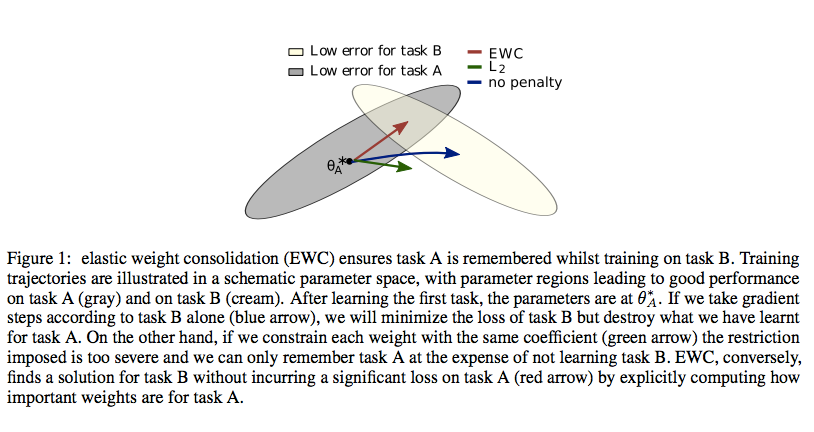 The resulting weights are optimized in a manner that  maintains a low error rate on both new and old tasks, so continual learning can occur with less accuracy loss as tasks are added as compared to SGD alone.

Moving forward, altering the actual network architecture (adding layers, altering types of layers included) and applying the EWC algorithm to a deep convolutional neural network and observing potential for greater accuracy benefits over SGD alone, as well as investigating how to maximize the number of tasks a network can learn with EWC before blackout catastrophe, are interesting areas of research of crucial significance in improving continued learning. Tweaking of the math in the current EWC implementation (perhaps by applying L1 regularization) could also result in improvements to the algorithm. Also, EWC is not the only proposed or demonstrated method for avoiding blackout catastrophe. As such, there are multiple other routes to explore in looking for a solution to some of the key obstacles faced by neural networks attempting continued learning.

It’s a lot to take in, but as I said before- this learning process has a momentum to it that has drawn me in. It’s an addictive search for both knowledge and ways to creatively manipulate that knowledge into some tangible improvements to contribute to a fascinating and deep (pun definitely intended) field.

For those interested, the DeepMind EWC paper can be found here:

And an implementation of the EWC code can be found here:

View all posts by Andrew Jones